“The Right to be Let Alone— the Most Comprehensive of Rights and the Right Most Valued by Civilized Men.”1

An Unreasonable Intrusion upon Seclusion

Tomorrow, the US Supreme Court hears arguments over the constitutionality of searching a person’s cell phone without a warrant. This Fourth Amendment area of law is complex and always nuanced. Warrantless search cases usually boil down to whether or not the person has a reasonable expectation of privacy at the time of the search. If there is a reasonable expectation, then the search may be found unconstitutional because it violates the Fourth Amendment’s protections.

My cell phone is my best friend

In the two cases the Court hears tomorrow, Riley v. California and United States v. Wurie, the former involves a smartphone and the latter a flip phone. The big difference between the two is the amount of data they may store and the advanced functions one is capable of performing. This results in one device conceivably having more confidential and private data than the other. On the flip side, how confidential and private do you consider your phone’s data? Do you ever leave it out of reach? Do you 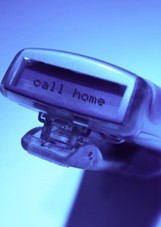 charge it in an open place that’s accessible by others? Is it password protected? Is it encrypted?

Use technology rather than being used by it

I am unsure if the Court is well-equipped to decide technology cases. It was only 4 years ago they decided a sexting case involving a warrantless search of a government employee’s pager. City of Ontario vs. Quon, 130 S.Ct. 2619 (2010). Yes, a pager in 2010. Last summer Justice Sotomayor stated the Justices do not use e-mail – even internally (but their staff does). In another technology case involving streaming TV earlier this month, Justice Scalia didn’t seem to understand HBO is not a broadcast TV channel you must pay to obtain. Chief Judge Roberts, whose initial drafts of decisions are written longhand in pen and on paper instead of with a word processor on a computer, asked during oral arguments in the 2010 pager case what is the difference between an email and a pager.

In prehistoric technological times, the Court decided we had a lower expectation of privacy in our gas powered, internal combustion vehicles (Motor Vehicle Exception) than in our homes. Carroll v. United States, 267 U.S. 132 (1925). Armed with only probable cause, a search of your car without a warrant is permitted. Id. More recently, but still in a technologically antiquated time, the Court decided a person in a telephone booth had a reasonable expectation of privacy (Hey, does anyone remember telephone booths? Or payphones?). Katz v. U.S., 389 U.S. 347, 350 (1967). But a person does not have a reasonable right to privacy in the actual numbers they have dialed to call someone on the phone. Smith v. Maryland, 442 U.S. 735 (1979).

A business cannot expect privacy. California Bankers Ass’n v. Schultz, 416 U.S. 21, 65 (1974). However, the government is not allowed to gather evidence against you via surgery—yes—medical surgery. Winston v. Lee, 470 U.S. 753, 758 (1985). Reasonably expecting your garbage is private would be a mistake. California v. Greenwood, 486 U.S. 35 (1988). In 1990, the Court said sobriety checkpoints are a reasonable way to search and seize (and catch drunks driving). Michigan Dept. of State Police v. Sitz, 496 U.S. 444 (1990). If you work for the government, your office is not private if your are suspected of work-related misconduct. Samson v. California, 547 U.S. 843 (2006). Although the rule established may be a “freedom-destroying cocktail” that encourages “malevolent” tipsters to make false reports, an anonymous tipster can now call 911 and the cop is authorized to stop you and search your car (despite your obedient driving skills) without anything more. Navarette v. California, __ U.S. __ (2014).

You have to wait until sometime around June 2014 to find out if the US Supreme Court thinks your cell phone data is private. But in the meantime, below is a poll to indicate how private you believe your cell phone is. Let’s at least find out how people that actually use computers, cell phones, the internet and all kinds of modern electronic wizardry believe the right to be let alone is.